New York is such an iconic city that many brands create products that you will only find in New York. So while in some cases, the price might be the same or even higher than other parts of the world, the product itself is unique to New York and you won’t find it anywhere else on earth. Welcome to my New York Shopping Adventure.

When you think of shopping in New York, you think of Macy’s or Bloomingdales or Fifth Avenue for all the top brands. With only 4-hours, and definitely on the hunt for a bargain, we opted for something else completely.

A $30 return bus ticket got us from Manhattan to Woodbury Commons Premium Outlet Mall in Central Valley New York in an hour. Initially, we found it weird that the other passengers on the bus had luggage with them, but once we got there, we quickly found out why – you need something to put all your stuff in.

Woodbury Commons is a popular outlet shopping centre. All in all, I walked about 15 km in under 4 hours – that should give you an idea as to how big this place is. So here is a guide of the kind of stuff that caught my eye (and in some cases, my wallet)

NIKE, ADIDAS, PUMA, CONVERSE
Once we converted the prices back to Rands, they were pretty much the same as back home, however, Converse did have a few items exclusive to New York. I already have enough Converse thank you very much.

NEW BALANCE
So I got some trainers for my daughter for just $30. Slightly cheaper than back home, but the style was unique. The best part was when I was at the pay-point, the cashier asked “Where’s the other one?” – Confused, I asked what he was on about – there was an in-store promotion – Buy-One-Get-One-Free. How awesome, I walked out with 4-pairs of trainers.

VANS
The trainers looked ordinary but at the entrance, they had T-Shirts on sale – 3 for $10 – bargain! I grabbed 6, all in different colours.

SUPER DRY
this brand is huge back home, but clearly not as yet in the US. I got T-shirts for $15 and hoodies for just $25. If I had more cash, I would’ve taken some jeans and winter jackets – compared to prices back home, or even the actual brand store on Times Square, it was half the price.

LIDS
Amazing store – full of sports stuff – mostly Hats – you can get them customised where they embroider whatever you want on it – takes a day and not cheap – but it’s original and awesome.

DISNEY STORE
Prices were so much lower than the store at Times Square. I found a Star Wars full costume for the character Rey & Kylo Ren for just $20 each. That’s like 80% off!

PRADA, LUIS VUITON, CHANEL, MICHEAL KORS and other high end brands
They had 75% off sales but if you consider the original price, even 25% is way out of my budget LOL!

There were loads of other stores and deals to be had and 4-hours was probably too little time. Pro shoppers would have an absolute field day. As a novice shopper, even I need to buy some extra luggage to cart my stuff home. I decided to wait until the end of the trip so I would know how big the bag needs to be, and just as well I did, because I found Century 21,  a multi-level department store located opposite Ground Zero and is a great place to shop as well. By the time I got there, the funds were a wee bit low, but luckily I had enough to get a gigantic hard shell suitcase. Complete with a cool New York City design, TSA Lock and just $60 – bargain!

The next time I’m in New York, I’ll definitely bring my pro-shopper along. 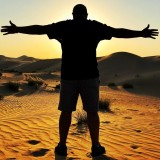